When it comes to Pisces, they are very often mistaken for being too dreamy and lost in their own worlds. Even though this perception is not entirely wrong, it is unfair to think that, that is all there is to them. When it comes to the personality traits of Pisces, there is so much more to them than what meets the eye; you just need to delve in a bit deeper and try to know them. Pisces people are truly unique and their personality is nothing short of distinctive and interesting. 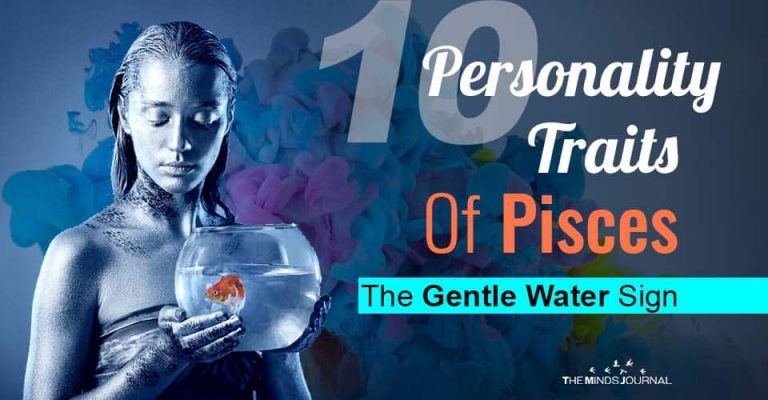 Here Are 10 Personality Traits Of Pisces, The Gentle Water Sign

1. They are extremely compassionate.

One of the most defining personality traits of Pisces is the compassion they hold inside them. Kindness and compassion are two of the most important virtues when it comes to Pisces. Their hearts are always full of love, and that’s why they always have a lot of love to give.

Most people belonging to this zodiac sign are empaths by nature, and will always strive to be there for you, no matter what. Even if they don’t exactly understand what you are going through, they will still try to support you in any way they can.

2. They always focus on what’s on the inside.

They love wanting to get to know someone on a much deeper and spiritual level. If someone is not interested in doing that or is not a person of substance, a Pisces will lose interest very quickly and simply leave.

For a Pisces, even the most gorgeous physical appearance won’t matter if the person is a horrible human being on the inside. They firmly believe that what is inside is what matters the most. Pisces people are not shallow people themselves, and that is why they would any day choose to hang around with genuine people, than people with no personality.

3. They are exceptionally emotional.

To say that a Pisces is emotional is an understatement. Pisces people are driven by their emotions and they always listen to their hearts more than their minds. This is the reason why they feel everything very deeply, be it something good or something bad.

Their deeply emotional nature makes them prone to frequent mood swings. They can be a ball of energy one minute, and extremely miserable the very next moment. It can sometimes get very difficult to keep up with their ever-changing emotions.

4. They can adapt very easily to almost everything.

One of the most prominent personality traits of Pisces and one that you will find in almost every one of them is their ability to adapt to any situation. People belonging to this zodiac sign are easy-going people, who get along with everyone they meet.

Considered to be the life of the party, they are very good at making people feel comfortable around them. Their adaptable nature and chilled out personality make them everyone’s favorite, wherever they go.

5. They can be irritatingly indecisive at times.

There is one thing about a Pisces’s personality that drives everyone crazy and makes them tear their hair out (figuratively, of course!). Their indecisive personality. Pisces people can be very indecisive and confused sometimes, and feel like a deer in the headlights.

Coming to a final decision seems like a monumental task to them, and they will constantly overthink about what they should or shouldn’t do. They always feel unsure and scared of making the wrong decision or making the wrong choice, hence the indecisiveness.

Even though Pisces people can be the life of the party, they also need to be alone at times to feel like themselves. Solitude and personal space are important to them, and without these, they feel exhausted and drained, both physically and mentally.

It is important for them to get away from everything and everyone once in a while, and just focus on themselves and what makes them happy. The people close to them might find this a bit hurtful, but a Pisces never does this to hurt anyone. They just need to recharge their batteries, and alone time helps with that.

7. They have an all-or-nothing approach in love.

Pisces people love love! They are one of those zodiac signs who have always waited for “The One”, even if they never admit it. Once they find the person who is perfect for them, there is nothing they won’t do to keep them happy. They give their all and never put their relationship in the backburner.

Relationships matter to them a lot, and once they give you their heart, be rest assured that you will always be their first priority. They will make you meet their family, their closest friends, and will never make any plans that don’t include you. Being in a relationship with a Pisces is nothing short of hitting the jackpot!

8. They can be hard to read sometimes.

One of the most common personality traits of Pisces is that they can be incredibly complex sometimes. They don’t always like to talk about what is going on their heads, but then again, there are times, when they will spill their heart out to you. If you ask them if something is bothering them, they might deny it, but then sometime later they might break down.

A Pisces’ complexities and their elusive nature make it very difficult to understand them at times. The best thing to do is to wait for them to come to you and talk about it. If a Pisces does not want to talk about something, it is better to not push them constantly, and try to make them talk about it.

9. They become distant when angry.

A Pisces does not get angry or upset that easily, but when they do, they tend to pull away from the person who hurt them. They become cold, distant, and start ignoring the person who wronged them. When they are angry, they will stop taking your calls and won’t respond to any of your messages, no matter how much you beg them to.

When a Pisces gets angry and is not given the space to calm themselves down, they explode and say whatever comes to their mind. Once they lose their temper, there’s no saving the person on the other side from the barrage of insults and harsh things that Pisces throws their way. And once they start, it’s near impossible to stop them or cool them down.

10. They are very competitive.

Pisces people might seem aloof and lost in their own world most of the time, but if faced with a challenge, they will give their all to win. They are uber-competitive even though they normally don’t seem like it. Winning matters to them the most, and they will do whatever it takes to emerge victoriously.

Never make the mistake of underestimating them, as their competitive nature and hatred for losing pushes them to knock out any challenge that comes their way. It is truly an asset having a Pisces on your team. Their never-say-die attitude is one of the best things about them.

Pisces people are surely some of the best people you can have in your life. They will make your life better from every aspect, and will even help you be a better person. If you are someone who has a Pisces in their lives, then give them a tight hug and show some appreciation!